Carbonara: here’s the recipes of the chefs 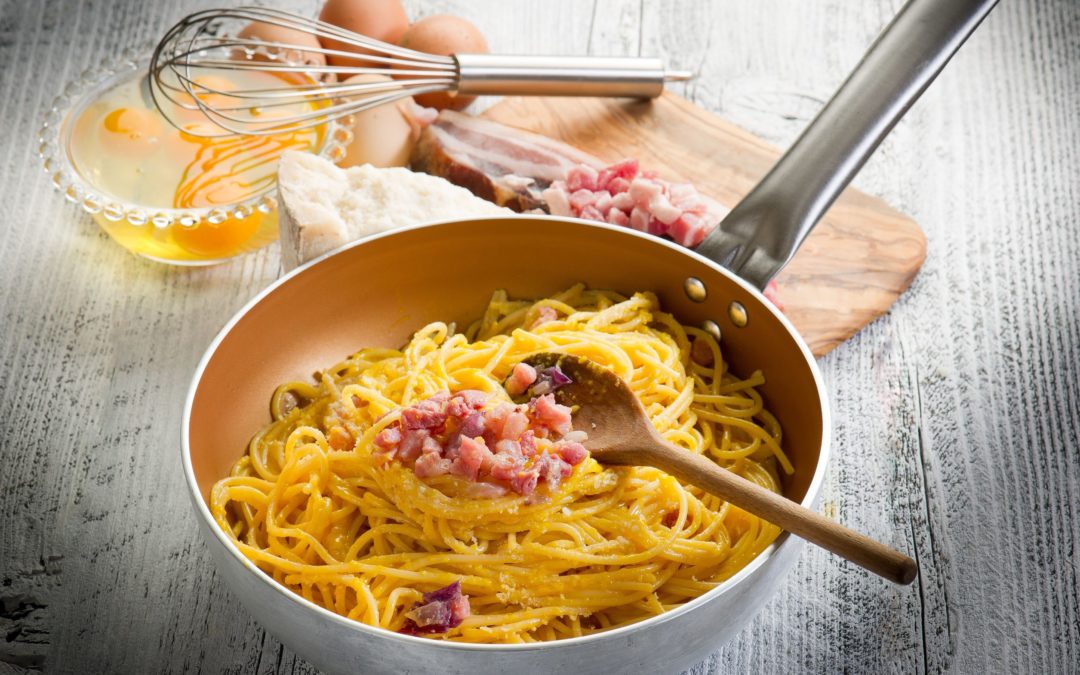 Guanciale or not guanciale? Bacon? Neither. Is it better pecorino or parmesan cheese? Shall I put some oil? And the egg white? What about garlic and onion? Do I have to add them too? Even chefs and experts have made proposals in line with the tradition or even breaking the mold. Let’s see how.

The South Tyrolean chef presents a Tyrolean reinterpretation, using only local ingredients. No eggs are beaten: the yolk is placed whole on top of the spelt fusilli, whose taste is enriched by leek, lard, malga cheese and speck powder; a unique dish gathering local raw materials as well as wise culinary technique.

This version features paccheri and a mix of parmesan and pecorino. Its mix of ingredients includes 1 egg per person, parmesan cheese, marjoram and lemon, half of squeezed garlic. The dance gets hectic; the noodles are in the water. The eggs should be beaten a little, warns Parisi, and the “composto carbonaro” (the mixture) is ready.

The special feature is the icing of the guanciale in the oven (not to exceed the point of smoke). The eggs are denatured with a whisk and coagulated in a bain-marie at 62°C. From the meeting between Kotaro Noda and the nutritionist Domenicantonio Galatà, comes a healthy Carbonara, lighter than a salad.

Chicken eggs are replaced by fish eggs, cod tripe and turbot skins replace guanciale. A transformation in taste and content is taking place, but conceptually consistent with tradition.

The Chef of Bavarian origin, who since 1994 has held up the fortunes of the restaurant La Pergola, proposes pasta filled with carbonara, adopting a mixture of egg and cheese, with a little cream, (yes, he can!). The dumplings are seasoned at the end of cooking with a sauce of guanciale and zucchini to soften.

Also in this case, the pasta is filled with carbonara and then creamed in crème fraiche. The result of a provocation where the core of the popular recipe becomes design, it is proof that if one can interpret tradition well, he can bring out something that comes out of the schemes, subvert them but does them justice.

Certainly the least replicable recipe at home, but in some ways the most adherent to the original, while becoming in the end quite different, so that it is served as an appetizer and not as a first course. It is an egg cooked at 65°C and covered with foam of pecorino cheese and parmesan cheese. Pasta? Blown rigatoni and crispy guanciale.

You can have it classic or creative: parmesan cheese, smoked bacon, egg, a “sprinkle” of agar-agar powder, butter, cream, truffle oil. What kind of pasta?  Taglierini. Add peas if you want to look creative.

A cerebral but very tasty interpretation of the carbonara, with low temperature coagulated yolk and crumble of guanciale. It was elected best dish in 2016 at “Primo”, Manhattan.

The pasta shape is one of the tiniest, the “risone”. The seasoning is the classic one, but lightened. The cream of pasta and egg is spread on a crouton, covered with a thin slice of guanciale.

The filling of the classic rice supplì is replaced by spaghetti, seasoned with beaten egg yolk, crispy bacon, pecorino cheese and a sprinkling of pepper. The preparation is pan-seared in the breadcrumbs and fried, as per tradition. So that Carbonara meets Roman street food.

The scientific divulger makes a precise analysis stating that there are many versions of carbonara but in all of them temperature control is crucial for success. In detail, the temperature of coagulation of the egg, whether you add only the yolks or even the egg whites, is 65 degrees.