#CARBONARADAY: MILLENNIALS LAUNCH THE CHALLENGE OF THE CARBONARA OF THE FUTURE 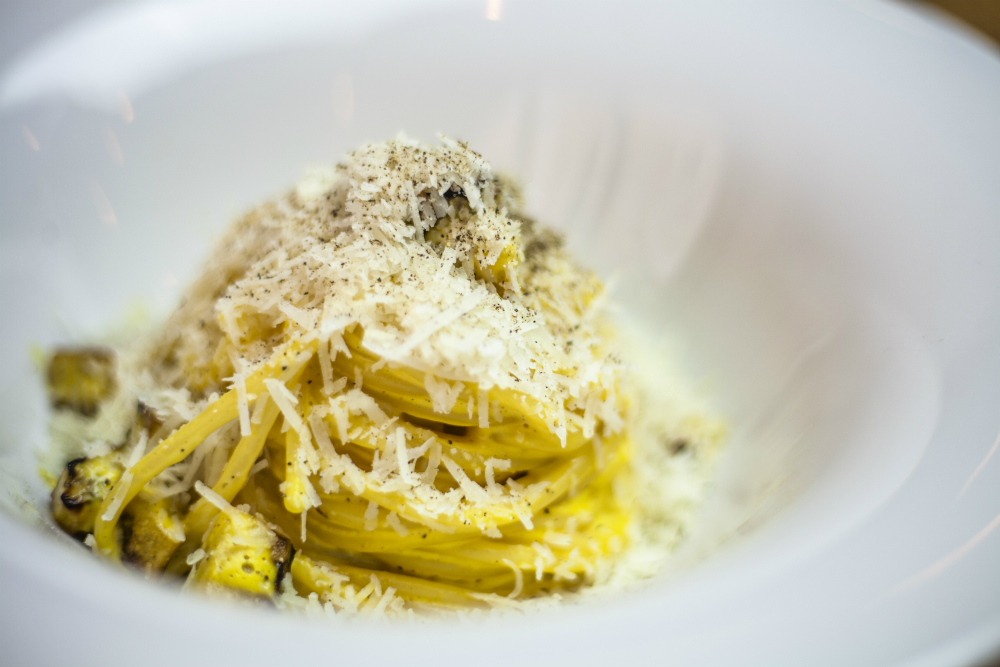 There are recipes that can enthuse us even off the plate. The Carbonara is the most striking case, so that it deserves a day of its own. The #CarbonaraDay, the event organized by the Italian pasta makers of Unione Italiana Food (formerly Aidepi) and IPO (International Pasta Organisation) that unites enthusiasts and gourmets from all over the world in the name of the most loved and debated pasta dish, is back on April 6th. Also in 2019 the #CarbonaraDay is presented as the social event of the year: last year a virtual square of almost 270 million people was involved, with 14 thousand contents published with the hash tag #CarbonaraDay. These numbers are three times higher than in the first edition of 2017.

More reason to further deepen the topic: the debate opens tomorrow, April 6th, from 10 am (CET). Just follow the hash tags #CarbonaraDay and #CarbonaraChallenge to participate in a virtual event that will see bloggers, food influencers, journalists and chefs sharing opinions, photos and tips on Twitter, Facebook and Instagram about this dish and, more generally, about the relationship between tradition and contamination in the kitchen.

If from a traditional dish Carbonara has become cool and trendy in the kitchen and on social media, it is also thanks to the passion that the new generations have for this dish. Carbonara is the recipe for the heart of 15-35 year olds (along with baked pasta)[1]. And it is also the most popular pasta dish of 2018 in food delivery[2], with the Millennials confirming themselves as the age group most likely to order ready meals from home. The 2019 edition of the #CarbonaraDay is ideally addressed to them to give new life to the debate.

WHAT DO WE TALK ABOUT WHEN WE TALK ABOUT #CARBONARA: 1 MILLION CONTENTS ON INSTAGRAM – When under 35s talk about Carbonara (or share their results in the kitchen on social networks), the traditional recipe of only 5 ingredients to season pasta (guanciale, pecorino cheese, egg, salt and pepper) is just the starting point. The reinterpretations (guanciale or bacon, garlic yes or no, egg yolk or whole egg, parmesan or pecorino cheese, etc.), come from personal tastes, family habits. And, more and more often, inspiration comes online. To date, over 1 million are the contents of the Instagram hash tag #Carbonara. An analysis carried out by Unione Italiana Food reveals that Carbonara is the laboratory of pasta that intercepts new food lifestyles and consumption methods, between last minute reworking and improvisations and new and unconventional ingredients. About  #CarbonaChallenge…

VEGETARIAN, ANTI-WASTE, LIGHT OR EMPTY FRIDGE: ALL THE CHALLENGES OF THE CARBONARA – Increasingly, the Carbonara “photographed” on Instagram is presented with an alternative pasta shape to the classic spaghetti (which is still the most popular). Among the others, the short pasta is nice, with rigatoni, mezze maniche and fusilli above all. And the desire for Carbonara also increasingly crosses with whole meal pasta, which adds to the dish the well-being of the fibers and a more complex flavor with scents of wood. Speaking about alternative versions, the vegetarian Carbonara with zucchini, artichokes, pumpkin, and mushrooms instead of guanciale, or fish (sea and lake), more delicate and fragrant, is also strong on the social networks. There is the “Royal” one, with truffle, and the anti-waste one, where the pasta is prepared with indirect cooking to save water and energy or the spaghetti are those of the day before, but in flan. And on the net you can also find tips for Light Carbonara: only 1 egg yolk for 2 people, microwave degreased guanciale, turmeric to add to pepper.  From one extreme to another, there are those who make a virtue of necessity with the fridge emptying Carbonara, using substitute ingredients of the territory (bacon, speck or ‘nduja instead of guanciale, parmesan instead of pecorino) because “he had no time to do the shopping” or, more simply, “he was longing for Carbonara” even if he did not have all the necessary “orthodox” in the pantry. And those who instead show their love for tradition by posting not the finished dish, but real still lives of expensive and valuable niche ingredients, purchased directly from the producer or the farmer.

THE ESSENCE OF CARBONARA: WHAT IF IT WAS STREET FOOD OR SPREADABLE? – The last trend is, perhaps, the “Essenza di Carbonara”: a dish-concept that keeps the visual and taste elements of the Carbonara, namely creaminess, flavor and crunchiness, but made with totally different ingredients: an example is the Carbonara with a recipe based on whole meal pasta, cream of yellow tomatoes and Tempeh. Or, as some chefs have thought (see Focus 1), deconstructed and recomposed for different occasions of consumption. Like the “Supplì of Spaghetti alla Carbonara” designed by Gabriele Bonci, or the “spreadable Carbonara” signed by Elio Sironi. And even when the Carbonara is prepared fulfilling the tradition, there are several exceptions: the result is the same, but it can be achieved in different ways, thanks to online tutorials or family tricks. For the creaminess of the egg, is it better to cook in a bain-marie over the water used to cook the pasta or to cook it cold in a boule far from the stove? What is the right size of guanciale, square or striped? Should it be cooked slowly or quickly?

FELICETTI: CARBONARA SYMBOL OF PASTA THAT LOOKS TO THE FUTURE – According to Riccardo Felicetti, President of the Pasta makers of Unione Italiana Food, “The Carbonara is the favourite dish of many… and also mine. Each one has its own secrets and its version and the equation of the perfect Carbonara is a challenge that fascinates millions of foodies and chefs around the world. We wanted to celebrate this dish to go beyond the idea of the ideal recipe. Pasta is so successful in the world because it is good and versatile and there are excellent Carbonare that also include ‘wrong’ ingredients. The many versions of this dish are proof of this: creativity and passion can also make up for the lack of traditional ingredients.”

A VIDEO ON THE “WRONG” CARBONARE OF YOUNG PEOPLE AND THE ADVICE OF MONOSILIO CHEFS – A gem: for this third edition of the #CarbonaraDay, Unione Italiana Food offers Carbonara lovers around the world a video – in Italian, subtitled in English – on the comparison between tradition and innovation in an ironic and light key. On the one hand Chef Luciano Monosilio, the best interpreter of traditional Carbonara. On the other hand, questions and provocations from the young students of the “La Cucina del Fuorisede” community who imagine the future of this dish. They give advice on how to create an alternative Carbonara that respects tradition: with whole meal pasta, with a different shape or with alternative ingredients, according to taste and what is in the pantry. The video will be published on the social channels of WeLovePasta, the platform of Unione Italiana Food dedicated to pasta lovers.

THE FUTURE CARBONARA (WITH JERUSALEM ARTICHOKE) OF LUCIANO MONOSILIO – According to Luciano Monosilio “I use spaghetti, but the medium short shapes such as rigatoni or mezze maniche can also “embrace” the dish. Whole meal pasta? It gives complexity to the taste, you can do it. And who knows if one day we will try to dare with the untouchable ingredient: pasta. Today we try the whole meal, tomorrow we could have one made with flour of legumes or even insects.” Even Monosilio accepted the challenge of the Carbonara of the future, creating a special recipe for the III #CarbonaraDay: a vegetarian “Carbonara Futura” (see Focus 2), where the preparation and the basic ingredients for the egg cream remain, but the guanciale is replaced with pieces of Jerusalem artichoke blanched and browned in olive oil in an iron pot. Although he would like to point out that “the only real Carbonara remains the one with the guanciale”…

ABOUT A DISH OF UNCERTAIN ORIGIN … WHAT IF IT’S YANKEE? – Perhaps Carbonara is so loved and replicated because its origins are uncertain and no one, not even in Italy, can still take it 100%. For some, this traditional dish would have more recent origins than you might think. The first hypothesis is that the Americans would have invented it. It was born in 1944 from the encounter between Italian pasta and the ingredients of the ‘K Ration’ of American soldiers (egg yolk powder and bacon). Going back up the Peninsula, the American soldiers accompanied the ‘K Ration’ to the spaghetti to supplement the dose of carbohydrates. A curiosity: the inventor of the K Ration is Ancel Keys, who, years later, would “discover” the Mediterranean Diet! This thesis is also supported by Marco Guarnaschelli Gotti, author of the Great Encyclopaedia of Gastronomy. The second hypothesis is that the dish would have been ‘invented’ by the charcoal burners of the Apennines (carbonari in Roman dialect), who prepared it using ingredients that were easy to find and preserve. The Carbonara in this case would be the evolution of the dish called ‘cacio e ova’, of Lazio and Abruzzo origins. A last hypothesis would lead the origin of the recipe back to Neapolitan cuisine. This thesis identifies in some of the recipes in the 1837 “Cucina teorico – pratica” by Ippolito Cavalcanti a possible origin of the dish.

Pasta is eco-friendly: in 10 years CO2 emissions have decreased by 22% and water consumption by 20%. Its packaging is 100% recyclable and its cooking water can be used in many ways. Enjoy pasta! #welovepasta