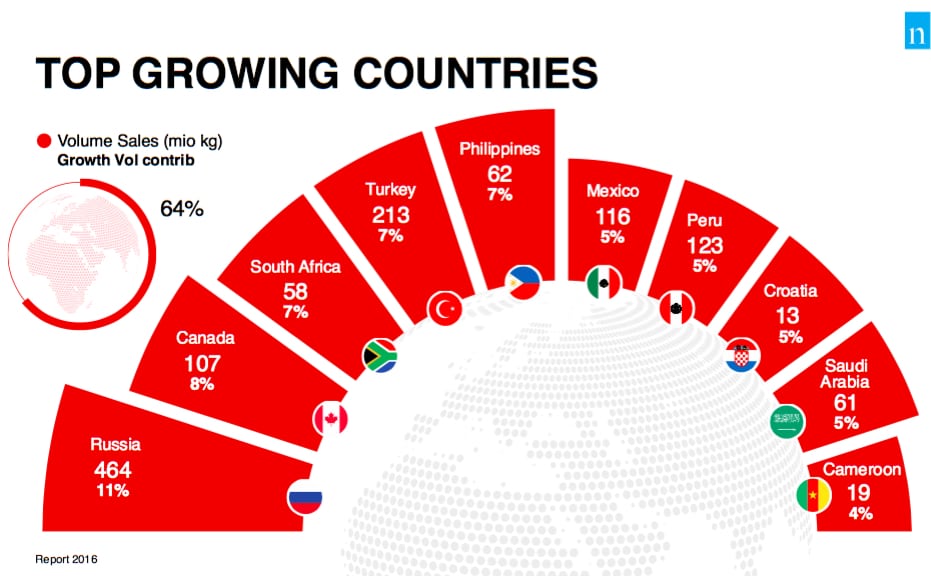 Consumer trends related to health and sustainability are driving pasta sales along with strong growth in key countries, according to data shared by The Nielsen Company at an international gathering of pasta producers last 30 May in Uzwil, Switzerland.
Stefano Galli, Global Client Business Partner, Nielsen, who presented at the International Pasta Organisation (IPO) Board Meeting, which took place in conjunction with the Annual General Assembly of the Union of Organizations for Manufacturers of Pasta Products of the European Union (UNAFPA), May 29-30, 2017, said, “We are seeing a positive trend in global pasta sales at +2.3 percent as consumers look for clean and green products on the supermarket shelf like Organic Pasta, which is now seeing double-digit growth in some countries.”
Mr. Galli said that this uptick is influenced by consumer attitudes showing an increased interest in wellness, and a sustainable approach to eating – and by pasta manufacturers that are offering innovative products to address these diverse needs.

“Overall, consumers show positive attitudes about pasta, recognizing it as one of the main healthy foods,” said Mr. Galli. “This is reinforced by a resurgence of growth in some mature markets as well as positive momentum in emerging markets.”

This is good news for the pasta industry, which has fought back against misperceptions brought on by the rise of unhealthy fad diets.

“Fortunately, people are starting to realize the truth about pasta: it’s really good for you and for the Planet — especially when you eat it in the right way,” said Paolo Barilla, president, International Pasta Organisation (IPO). “Made of two simple ingredients — durum wheat semolina and water — pasta is a complex carbohydrate that, when combined with vegetables and legumes and other healthy pairings, is delicious, and one of the easiest and healthiest of mealtime choices.”

Niche products such as gluten-free pasta are also seeing strong sales, although there is only a small segment of the population that must avoid gluten for health reasons. For the remainder of the population, there is no evidence of any health benefit to removing gluten from the diet.
In fact, an international committee of scientists and food authorities addressed gluten-free trends for the first time at The Scientific Consensus Conference on the Healthy Pasta Meal in 2015. The findings in the Consensus Statement stated, “The general population can eat pasta and should not choose a gluten-free product if not aﬀected by a gluten-related disorder correctly diagnosed. For those with gluten sensitivities or allergies, or celiac disease, there are gluten-free alternatives.”
Another area of advantage for pasta is that, as a plant-based food, it has an extremely low environmental impact, making it especially attractive to consumers. As one of the least intensive foods to produce, pasta is energy dense, and easy to store and distribute.
There is another benefit for manufacturers that go green: Nielsen data shows that globally, 66 percent of consumers are willing to pay more for brands committed to sustainability.
According to Galli, there are key markets that are helping boost growth – and not the ones commonly associated with pasta, which reinforces the allure of this staple throughout the world. These include Russia (featured site of 2016 World Pasta Day festivities), Canada, South Africa, Turkey and the Philippines. 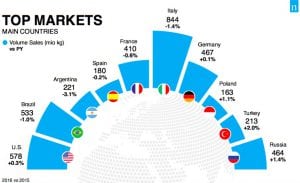 Additionally, Galli names five emerging countries that have the potential to drive substantial future growth. These include Cameroon, the Philippines, South Africa, Guatemala and Romania. 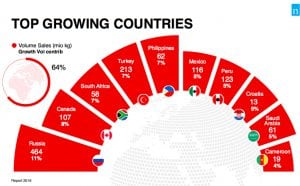 There is no doubt that pasta, with its incredible taste and versatility, continues to be a favorite worldwide due to its accessibility and adaptability to all populations and world cultures. According to Nielsen, future growth is expected to come from breakthrough category innovation, tapping into millennial preferences and digital influences.

World Pasta Day 2017
Underscoring the message that pasta is a global food, IPO announced the 2017 World Pasta Day special event will take place in São Paulo, Brazil. Since 1998, this annual industry celebration has been held on October 25, and recognizes the important role pasta plays in helping to feed the world through a variety of healthy and tasty cultures.
As part of the celebration, countries around the world are joining together for “Pasta For All,” a coordinated program where donations of pasta are made to local organizations fighting hunger. Celebrity chefs from various countries will participate as well. IPO expects to donate more than a million pasta plates globally.

Healthy pasta: that’s why pasta is good for your health #welovepasta https://t.co/WZEYCrBnOo

Do you know that the use of pasta and whole grain products generates benefits on cardio-metabolic health? Consuming pasta and fiber-rich foods reduces the risk of cardiovascular disease and diabetes #welovepasta